I’ll break this post up into several parts, since there’s so much to tell (plus pictures).

Orphei Drängar is one of the world’s best men’s choruses—you can find their website here—with a history that dates back to 1853. They came out of a tradition of student choirs at the famous Uppsala University (founded in 1477), although OD (as it’s called) has long had members who are no longer students. Uppsala itself is a beautiful university town with a rich history and impressive Cathedral and castle. Because of the Cathedral (earlier versions than the present one) it has been the center of spiritual life in Sweden since the 1200s. 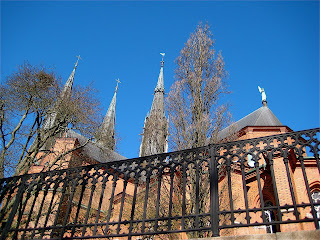 The first time I came to Sweden in April of 1989, OD formed the “bookends” of that visit. When I arrived, they were about to go on a short tour with Eric Ericson and he invited me to go along—and so I did, riding the bus, attending rehearsals and concerts, staying at the hotel with them, eating meals, and generally having a wonderful time. At the end of my stay Eric invited me to attend the first of May “Serenade” concert (which Robert Sund was conducting). This is part of an important time in all Northern countries when Spring is officially declared and the long, dark winter over—and in this case the students party, shall we say, impressively! We had a luncheon with Orphei Drängar, then the afternoon concert, then went to the library for sherry with some honored guests and the President of the University. At the appointed hour we all went out onto the balcony where we could see that every square foot of ground was covered with students. The President made the official announcement that Spring had arrived and the students cheered, threw hats into the air, and began their celebrations. Shortly afterward we went to the castle, where we heard a brief, outdoor performance by Allmänna Sången under their new conductor, Cecilia Rydinger-Alin (Robert Sund had recently finished his 15 year stint as their conductor)—you’ll see (if you haven’t already figured it out) how prescient all of this is! After that we had a lovely dinner at the Castle. You can imagine this was a pretty impressive introduction to Sweden and OD!

By the way, if you conduct a men’s choir, OD has probably the most extensive library in the world for this repertoire, and the library is online in a searchable database here.

OD has a particularly strong history of conductors: Hugo Alfvén (you may know his beautiful “Aftonen”) was the choir’s fifth conductor from 1910-1947 and raised standards, plus writing many compositions for this choir. Eric Ericson followed him from 1951-1991, which meant further increases in the choir’s standard, a much wider repertoire, and eventually recognition and tours outside Sweden (they first toured the USA in 1970, for an incredible six weeks). Robert Sund has had a long career with the choir, beginning as a singer in 1965, becoming Eric’s assistant conductor in 1968, in 1985 becoming co-conductor with Eric (they alternated responsibility for concerts), and sole conductor in 1991.

Robert and I also go back a long way. While I met him briefly in 1989 in Sweden, I really got to know him a month or so later, when we were both judges at the first International Chamber Choir Competition in Marktoberdorf, Germany. All the judging discussions were done in German and I sat next to Robert, who was kind enough to supply me with words when my German ran out! We’ve kept in touch over the years; he helped with background when I was researching my dissertation on Swedish choral music the summer of 1990, and I also brought him as a clinician to the PLU summer choral workshop in 1993. I’ve seen him and his wife Margareta at conferences and on every visit to Sweden since.

That’s all prelude to the events of this past weekend, which marked Robert’s 66th birthday and his last series of concerts with OD in Uppsala (he will lead them on a tour to North America in October—don’t miss it if you’re anywhere close by!). Margareta and Karl Eric Ericson were the primary conspirators (Karl Eric is a life-long friend of Robert’s, was involved with the tour I was a part of back in ’89, and was at a memorable dinner at Robert and Margareta’s in 1996 after Kathryn and I were married). Along with a few others I got this message from Karl Eric a year ago: “I am writing to you as a member of a "secret" group within Orphei Drängar. The group is planning for Robert Sund's last official appearance as OD's conductor. Part of the planned activities and events will be kept in utmost secrecy, especially for Robert. My task is to approach some of Robert's old and close friends inviting them to Uppsala for the concert on April 19. We believe that Robert will be highly surprised but also most happy and delighted to spot you and the other old friends in the audience during the concert!” 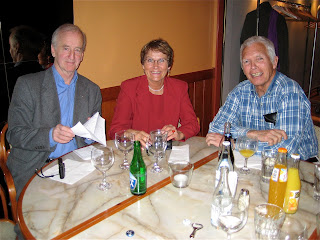 Karl Eric and Margareta did an amazing job of keeping this secret . . . except for me, since Robert already knew I’d be in Sweden. I got a message from Karl Eric in January: “I guess that Robert will rather soon contact you. The reason is that OD's president (Christian Wetterberg) a few minutes ago has talked to him about OD's wish to invite his two sons and their wives to the concert and the dinner. At the same time he asked Robert if there were some other persons he would like OD to invite for the event. His first proposal was you! The president told Robert that OD will invite you as soon as Robert has delivered your contact addresses! So, in short: when Robert contacts you - try act as if you are really surprised! That is to ensure that Robert will not get a suspicion that you already know about this.” Of course, I acted “surprised” when I got the call from Robert!

So it was that Kathryn and I got to go to this truly fantastic event, along with other friends of Robert, including Philip and Carolyn Brunelle, Gunilla Luboff, and Jerry McCoy from the USA; Diane and Dick Loomer, and Lawrence Cherney from Canada; Gardar Cortes from Iceland; Tove Ramlo-Ystad and Tor Ystad from Norway; Steen and Sigga Lindholm from Denmark; Matti and Mariana Hyökki; Seppo and Laura Murto, and Gottfrid Gräsbeck from Finland; and Ágnes Szalai from Hungary (Ágnes is also a dear friend of ours—we also met for the first time in Marktoberdorf). Simply put, it was a great honor to be included in this group and the amazing weekend. 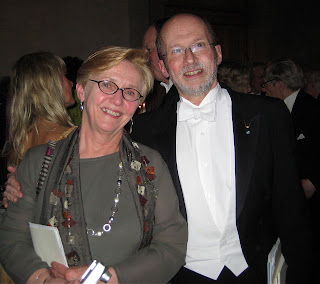 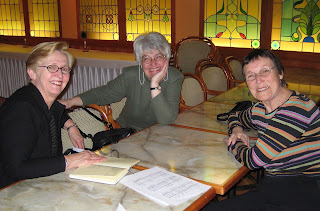 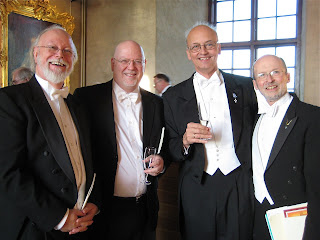 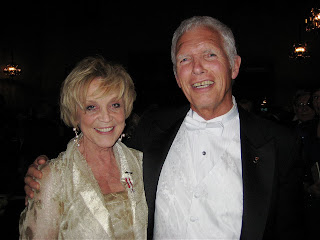 Lawrence Cherney (on the right--Seppo and Laura on the left): 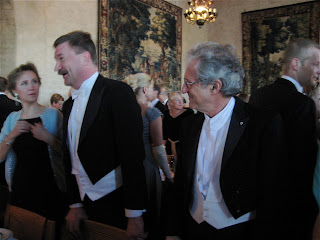 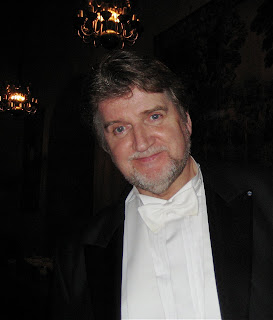 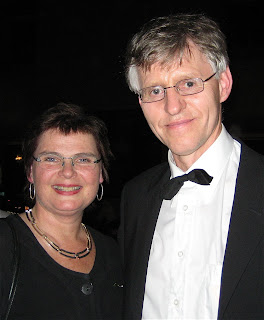 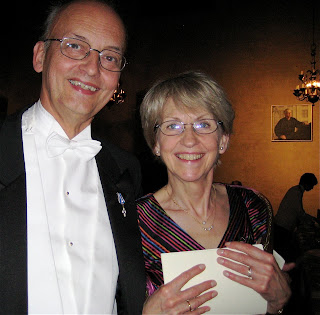 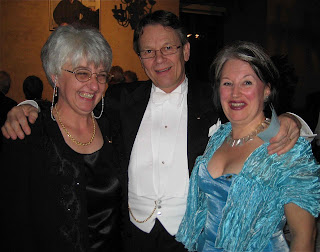 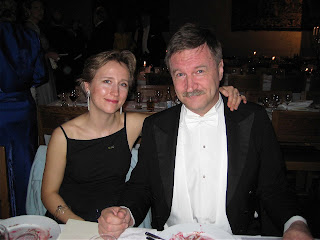