Mark Swed, music reviewer for the LA Times, writes a great piece on the word "elitism" and its use in other fields (athletics, for example) as opposed to the arts.

He opens the article with, "Every now and then, writers at The Times lose a word. Mainly these are adjectives subject to misuse. Some years ago we were advised to let go of legendary. Similarly, don't expect to see iconic, which has become equally cheapened, in the paper much anymore.

The adjectival criminal I'd like to see handed over to the word police is elitist, especially in its relationship to the arts and popular culture. In the "elitist" Oxford English Dictionary, the first definition of "elite" is the "choice part, the best (of society, a group of people, etc.)," none of which sounds so terrible. But that is not what is meant when, say, classical music, my field, is scorned as elitist, as it regularly is."

This has bothered me for a long time. "Elitism" in the arts usually implies "stuck up," "snobbish," or worse. Yet we speak of "elite athletes" with no problem.

The arts are often considered expensive, only available to the "elite," not the ordinary Joe. Yet if you look at the cost of attending professional sporting events, pop/rock concerts, or other parts of pop culture, prices are certainly as high or higher.

Salaries for professional athletes or artists in the entertainment world are far more "elite" than those in the arts.

So why is elite a bad word in the arts, yet not so in other areas?

I say it's time to reclaim the words "elite" and "elitism" for their proper place in popular culture for the arts.
Posted by Richard at 6:14 AM 5 comments:

Email ThisBlogThis!Share to TwitterShare to FacebookShare to Pinterest
Labels: elitism

Kathryn and I spent time last week in Oregon. Thursday, June 26 we spent in Portland, one of our favorite cities, since the downtown is so humanly scaled and walkable, and it has great stores, shops, and restaurants. The weather was beautiful, so we enjoyed our afternoon and evening there and had a great dinner at the Heathman.

The next day, we went to Eugene, where we were staying with our friends Mira Frohnmayer and Marcia Baldwin. Mira was chair of the vocal department at PLU from a few years before I arrived, meaning that we worked together for 18 years. Some choral conductors have problems working with voice teachers, but I have to say Mira and I had a great relationship as colleagues. She's a terrific teacher with a knowledge of repertoire that's unmatched. Her partner, Marcia (their 15th anniversary is just a day away from our 12th--ours the 6th of July) had a great career as a singer (the Met, SF Opera, Santa Fe, etc.) and taught at Eastman before joining the PLU faculty. They're both terrific people and great fun to be with. Marcia's a great cook, so we had a number of fabulous meals at Chez M&M. 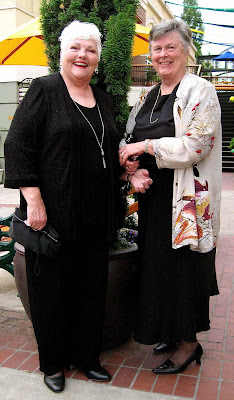 They retired a couple years ago, but spent time this past year teaching at Loyola in New Orleans for Mira's brother Phil, who's being treated for cancer. They loved teaching again, so will hang out their shingle again for a bit of private teaching in Eugene. If you're there and need a wonderful voice teacher, look them up!

Saturday evening we went to a performance of the Mass in B Minor, the opening concert at the festival. They'd really opened the night before in Portland, the first time in years that the festival had taken a program to the "big city." The performance was very good, but perhaps not as electric as Rilling's performances often are. It could be that the night before (which by all accounts went spectacularly) took a bit of the edge off--it may not have helped that they did the performances without intermission, too! Soloists were good, particularly Ingeborg Danz, who's been Rilling's "house mezzo" for years. You may remember that she sang in the great performance of Schumann's Das Paradies und die Peri that Daniel Harding did with the Radio Choir in 2007. Chris Cock was also wonderful in the tenor solos. Chris is a PLU alum (from before my time) who teaches at Valparaiso University. He also sang the Evangelist for me in a memorable performance with the Choir of the West at PLU in 1993. We enjoyed the performance and seeing Chris, even if briefly, plus some other friends such as Paul Klemme, Therees Hibbard, Anton Armstrong, Royce Salzman, Philip and Carolyn Brunelle, and Birgit Hemberg (yes, from Sweden!).

Sunday was a great day of visiting, first to Philomath, Oregon, where a former student of both Mira and mine, Nathan Warren, has a winery that he runs with his wife Amanda (who's due any day now). We saw Nathan a couple years ago, but didn't meet Amanda, and Mira and Marcia hadn't see the winery. The Harris Bridge Vineyard is a small operation, but Nathan and Amanda are being very successful specializing in dessert wines (and they are good).

The winery is named after a covered bridge just outside the winery, and here are Nathan and Amanda as well: 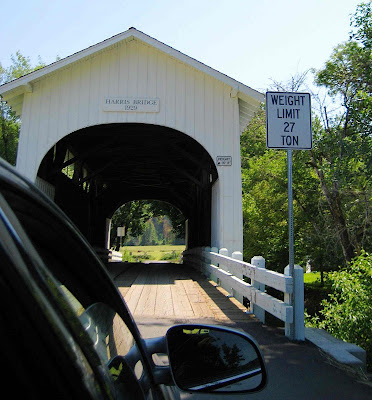 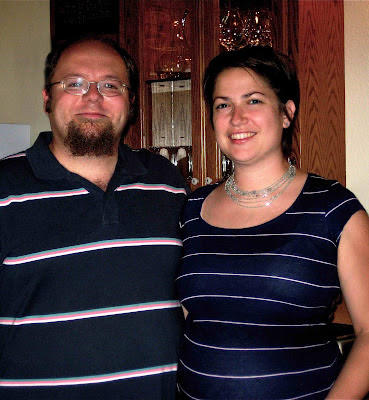 We got back to Mira and Marcia's in time to meet old friends for drinks: Robert Ponto and his wife LeeAnn (don't know if I got her spelling correct!). Bob was the band director at PLU some time ago and both are wonderful people--I'd lost touch, even though Bob has been teaching at the U of O for awhile now. Very nice to see them again.

The next evening we managed to get tickets to the Garrison Keillor performance at the festival even though it was sold out, thanks to conductor Phillip Brunelle. Phillip is an amazing bundle of energy and accomplishment who's been with Garrison since the very first broadcast of the Prairie Home Companion, and also is conductor for all his gigs with orchestra. The performance was wonderful, utilizing not only the orchestra but the Festival Chorus and the Youth Chorus. Garrison was, as usual, funny and moving at the same time. Phillip says the shows always change and at one point he's at the piano, playing hymns as Garrison talks about the different organists at the church (this night Wagner, Debussy, and Stravinsky, among others. As Phillip says, he never knows who Garrison will mention. And of course there was also the marvelous Lutheran's Guide to the Orchestra.

The following morning we bid adieu to Mira and Marcia (and great thanks to them for their hospitality), then went to meet Phillip, his wife Carolyn (a well-known artist), and our Swedish friend Birgit Hemberg (who's been friends with the Brunelles for many years) for lunch. 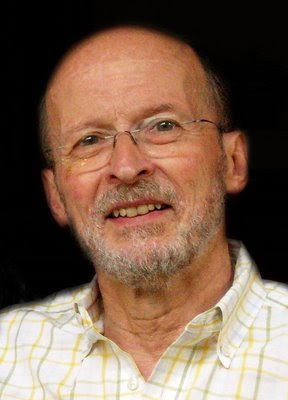 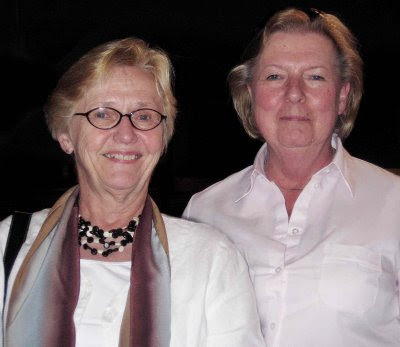 It was Phillip's 65th birthday and we had a delightful time, after which we headed back up I-5 to home.

All in all, a great anniversary trip.
Posted by Richard at 11:27 PM No comments: