In 1972 I went to Eugene, Oregon to study at a fledgling Bach festival (founded in 1970) with a conductor whose work I knew through recordings and an experience in 1971 in Stuttgart following a choir tour in Europe (more about that here).

The primary work performed at the festival that year was Bach's great Mass in B Minor and it was a mountaintop experience for me. I was able to conduct the mass myself for the first time in 1975, just before I turned 25, and my interpretation and approach at that time owed much to Rilling--of course I learned many other significant lessons from him that summer.

So, now in 2013--41 years later!--I was able to come back to Eugene for Rilling's swan song as Artistic Director of the Bach Festival he co-founded with Royce Salzman in 1970 (Rilling will remain Music Director Emeritus and be back to conduct, although Matthew Halls, who's been Music Director Designate for three years now, will take over main duties. I was able to attend a public interview with Halls and he's most impressive--the festival is in very good hands). 44 years at the head of a festival such as the OBF is an amazing tenure.

And what work was performed as the finale but Bach's B Minor Mass, of course! It was a joy to watch Rilling, at age 80, do this work, which he's conducted thousands of times by now. A picture from the post-concert bows (a well-deserved standing ovation which went on a long time): 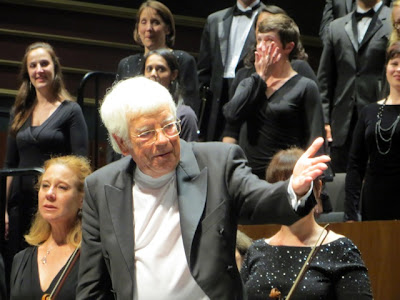 This led me to reflect on several significant transitions for me as well, connected with the "3"s.

40 years ago, in 1973, I founded what would become Seattle Pro Musica. It started with a chamber choir and in the 2nd year I began an ensemble devoted to performing Bach cantatas once a month (it was at the end of that year, when I combined the chamber choir and the Bach Ensemble for that 1975 performance of the Mass in B Minor, that Pro Musica was officially incorporated). The Bach Ensemble itself was directly inspired by watching Rilling lead a Kantat-Fest weekend at the Gedäctniskirche in Stuttgart in 1971. As I've stated before, my work with Seattle Pro Musica was the beginning of my real post-graduate education and formed me as a conductor.

Then, 30 years ago this coming fall, in 1983, I became Director of Choral Activities and conductor of the Choir of the West at Pacific Lutheran University, my most significant education to learn what it is to be a teacher (I would spend 18 years in that position).

And 20 years ago, in January of 1993, I formed what would become Choral Arts for a concert in Seattle with renowned Swedish conductor Eric Ericson. Ericson was an enormous influence for me, of course, as you will find if you look to the right at the number of posts on this blog that connect to him, Sweden (and many other Swedish conductors) and the Swedish Radio Choir. Again, Choral Arts was a huge part of my post-graduate education and allowed me to conduct many works I couldn't have approached in any other way (or with any other ensemble).

Not all major transitions for me have happened in years ending with 3's, but those turning points 4, 3, and 2 decades ago were among the most significant for me professionally.

My huge thanks to Helmuth Rilling for inspiring me and so many others.

Posted by Richard at 6:01 AM No comments: