David Lang (whose Little Match Girl Passion has been an enormous success), in an op-ed in the NY Times, promoting new music, but comparing classical music to baseball (really!):


Certain things that happen in classical music would be unthinkable in baseball. Imagine a baseball game in which all the players dress up in the uniforms of a hundred years ago, and then follow, pitch by pitch, a classic match-up from the past. Imagine watching a game, and saying that a hit or a run on the field in front of you is not as elegant or meaningful as a hit or run from a game 50 years before. Imagine seeing your favorite team win a game, but discounting it because you remembered a previous incarnation of that team that was more talented or exciting. Or imagine going to a game that wasn’t as thrilling as a game you remember from your past and then deciding never to see another live game again.

That last one is the analog to classical music that bothers me the most.

Could baseball have a lesson for music lovers that would allow us to appreciate the past and the present at the same time? What is behind this ability of baseball fans to connect the present action to the sport’s past glory and still appreciate the moment-to-moment excitement of the players on the field? These aren’t distinct functions of sports fandom; they are closely related to each other, and they inform each other. A fan appreciates the successes of the past more as he or she sees contemporary players working to succeed now, and vice versa. This is the kind of thinking that the institutions of classical music need to promote if we want the field refreshed by new music and musicians.

I think what baseball projects, and what classical music needs, is the sense that one goes to a live event not to experience greatness, but to experience the possibility of greatness. It really comes down to risk. We revel in the risk inherent in the clash of competing ideas and options, before time evens them out into a few straight, orderly narratives. The game, the concert, the experience in front of us — the chance to experience greatness is a risk. Not every game is great but what we go for is the chance that this particular game might be. Maybe for baseball fans the possibility of greatness alone is reason enough to go.

Then pianist Jeremy Denk (whose blog is wonderful) wrote a response:


David is giving us a metaphor for the classical concert experience, hyperbolically, to emphasize its absurdity, i.e. as in, look how ridiculous it is, all of those people in their tuxedos playing old music! Now, I agree a classical concert can sometimes seem or even be absurd. But am I the only performer out there who finds this metaphor demeaning? Is that what composers think we do? The association I get is that classical performers are something like Civil War reenactors. We prance out there in our silly clothes and try to mimic some thrilling event of the past, but it’s a battle so predictable and harmless that people are serving drinks, memorabilia: we already know the score, who won, who marched where, who pitched a fast ball, who had better cannons, who committed an error, what handkerchief Napoleon sneezed into, no matter what detail you choose, the point is the result is foregone.

When I was a child, my parents took me to a Revolutionary War reenactment, and it was ridiculously hot and my mother got faint from the heat and had to be tended in an ambulance. I forgot who won. Come to think of it, ambulances are present at many classical music concerts too.

David’s metaphor, which attempts to capture the absurdity of the classical concert, is itself absurd. It collapses upon the slightest examination. Suppose you were to reenact a baseball game, “pitch by pitch,” the way he suggests. OK, you have somebody out there, and you say throw a curve ball, that’s what happened in the original game, and the guy throws a curve ball, would he be lucky enough to capture the exact curve of the pitch as thrown in 1959 or whenever? And if so, would the breeze floating across the field be precisely the same so that the parabola of the ball would confuse the batter in precisely the same way, and the flutter of the flags and the taste of the beer in the stands and the sweat and hope of the players would those be the same too? You get my point. Reality would continuously, infinitely frustrate the recreation of the ephemeral event, and you would never get the same score. A baseball game CANNOT be reenacted in this way, and that is why it is absurd to do it, and that is why the metaphor is silly, not because classical music is silly. The only way to “replay” a baseball game would be to DVR it and watch it, or devise some incredibly subtle robots to perfectly recreate every single muscular movement of all those players on the field, a technological feat that might pointlessly consume many programmers’ lifetimes.

Read the full posts--what do you think? In what ways can we make the concert experience more relevant or interesting? I've written about a few things, such as our Victoria Requiem performance. But in what other ways can we make classical music exciting? Let me know.
Posted by Richard at 8:46 PM 1 comment:

I had a great time visiting friends and family in Washington state the past three weeks. The impetus was my former choral group, Choral Arts, beginning a commissioning project in my name--a great honor, I think!

The initial work was by Eric Barnum, Sing in the Dark Times, and it was magnificent. Thanks to Robert Bode, the choir and board for making this possible!

Below, me, Robert and Eric from the reception following the concert: 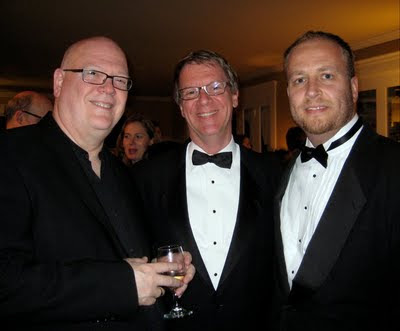 17 of the 26 singers had sung with me, not so much a tribute to me, but to Robert and the work he's done with the choir.

The week was full of memories and connections.

The night we arrived, we went to a concert by the Choir of the West under Richard Nance, my good friend and colleague, who's now Director of Choral Activities at PLU. They sang wonderfully, just before leaving for their European tour. I was DCA at PLU and conductor of the Choir of the West from 1983-2001.

The next night was the Seattle Opera's production of Magic Flute, which we attended since John Tessier, a friend and soloist with Pro Coro Canada, was singing Tamino. A beautiful performance by John and it was nice to chat with him backstage afterwards. He'll sing in Dallas this coming season, so we hope to get him out to UNT for a masterclass.

However, in the lobby we also saw Karen Thomas, conductor of Seattle Pro Musica, who's done such a great job with a group I founded in 1973.


Other memories as well, of course. It's the 10th anniversary of when I left PLU and also the 10th of the tragic death of my close friend, James Holloway. Jim was a brilliant musician (pianist, organist, conductor), raconteur, cook, and much else. Jim and I worked together even before he taught at PLU, he accompanied Choral Arts many times, played and stood for me in our wedding (a close friend of Kathryn as well, in a sense he introduced us), and came to Hungary with us just after we were married in 1996 to play the Bernstein Chichester Psalms and work as accompanist with me during a "Singing Week" in Veszprem--yet another eerie connection on this trip was that the third movement of Chichester was on the Choral Arts program. Jim was murdered just the day after my last big performance at PLU, the Verdi Requiem, and just before I'd take the choir on my final tour at PLU, to Scandinavia.

Most of the memories, however were good ones,  and the ones listed above are just a small part of the memories evoked during this trip. I can't begin to list all the friends and family we were able to see, but it was a great time.

I've been blessed!
Posted by Richard at 6:10 PM No comments: