What we can learn from John Wooden XIV

It's been fun to look into John Wooden's career, techniques, and writing about him and his methods--and how it might apply to us as conductors. This final post summarizes the series and also suggests reading for those of you who wish to explore further on your own. I hope you've enjoyed it and gotten something worthwhile from it.

The first book I'd go to is Gallimore and Nater's You Haven't Taught Until They Have Learned--much of what I wrote in the series draws upon this book or the earlier research by Gallimore and Tharp (which is included in the book). I think the next one I'd get is Wooden on Leadership, by John Wooden and Steve Jamison (Jamison was closely associated with Wooden and co-authored a number of books with him). It tells much of Wooden's journey, early life, and coaching philosophy, and is as complete a look at all of this as you'll find from Wooden. An additional bonus are actual excerpts (copied directly) from Wooden's journals, practice plans, etc.--they're sometimes hard to read, but are a great first-hand look at his life's source material. A shorter book, but still worthwhile, is Wooden and Jamison's The Essential Wooden: A Lifetime of Lessons on Leaders and Leadership.
I've listed the whole series below in order:
I hope you'll take what you find valuable from the example of a great coach and teacher--and apply it to your own teaching. I know I have more work to do.
Time to take a break, so I'll begin again sometime in January. If you have suggestions for topics, please write!
Posted by Richard at 2:43 AM No comments:

What we can learn from John Wooden XIII

The title of the book by Gallmore and Nater comes from the seventh chapter: You Haven't Taught Until They Have Learned.


I've talked about that topic already, but the element in this chapter we'll speak of today is that of favorite teachers. We've all had them and their influence is often huge. So, what can we learn from them?

Gallimore and Nater write about what those teachers have in common:
Some of these things are common with all of my favorite teachers, but not all. Not all have been extremely organized (although all have managed, some with the help of others), some weren't free with compliments about progress, and not all placed priority on individualized instruction. But all shared the other characteristics.

Please share stories of your favorite teachers--is your list similar to the one above? Are there other characteristics left out? Let us know.
Posted by Richard at 3:27 AM No comments:

What we can learn from John Wooden XII

One of the most interesting chapters for me in Gallimore and Nater's You Haven't Taught Until They Have Learned is the third chapter, "It's What You Learn After You Know It All That Counts the Most."

Given Wooden's great skill and knowledge, it was fascinating to read that right after taking the UCLA job in 1948, he embarked on a systematic program to increase his knowledge during the off-season. From Nater and Gallimore:

At the conclusion of each basketball season, during the off-season his self-improvement research began. He chose only one topic for each off-season study (e.g. defensive rebounding, free-throw shooting, etc.). The goal was to uncover all he could learn about a specific subject, draw conclusions, and apply it to his teaching.
Coach Wooden's premise was the assumption that all the essential truths about each topic existed "somewhere," but scattered across many sources. Some of these truths were in books, some in the thoughts of successful coaches and athletes, and others were, perhaps, in places he never considered. Some ideas were his own (e.g. many of his ideas on free-throw shooting--as a player he once made more than 130 in succession), but needed testing, refinement, and elaboration, just as any researcher tests the theories that guide investigations. Thus, Coach's approach was essentially similar to empirical investigations in all fields of inquiry.

They then follow Wooden's process through one research topic, that of free-throw shooting. The process went as follows:
There are obvious possibilities for any of us to investigate in this manner--and improve what we and our choirs do. One could research all kinds of topics, from choral sound (what are your choir's weaknesses? whose choirs--of the same type as your choir--make a sound you like?), intonation, rhythm, diction, phrasing, expression, etc. Or you could explore style: performance practices in Bach, renaissance music, etc.
Don't be surprised if you get a call from me at the beginning of the summer!
Posted by Richard at 4:29 AM No comments:

What do you demand of your students? 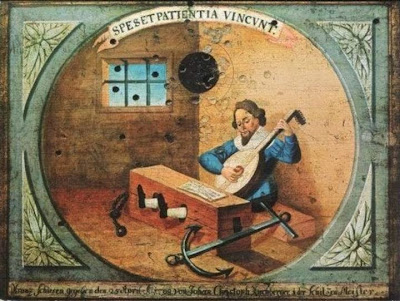 This got quite a few responses (as you might imagine!), but Brian Dohe, a former student at PLU said, "For students who fail to memorize the German text of Brahms' Liebeslieder Waltzes . . . "

That got me thinking about how much I asked of students at that time. The Brahms happened because two wonderful pianists (sisters: Robin and Rochelle McCabe) were booked to do the Artist Series at PLU. I contacted Robin and asked if they'd be willing to do the Brahms on the program with the Choir of the West. Robin said yes, so we programmed that . . . and I thought the music would make the best impact if we sang from memory . . . so we did.

That same semester (1985, so a big anniversary year for Bach, Handel, Schütz) we did the Bach Mass in B Minor with the professional NW Chamber Orchestra. And in January we did our tour program, which we also did at the PNW Bach Festival in Spokane, along with Bach's cantata #50.

And that fall on the Christmas program we sang the Poulenc Gloria.

So the rep that year was:
- usual carols plus Poulenc Gloria
- a tour program: