British critic Norman Lebrecht has done a great series of interviews for the BBC. Now available free for download here.

Posted by Richard at 2:01 PM No comments:

Chorus America has a nice remembrance of Diane Loomer:


On December 10th, the choral world lost one of its celebrated and respected choral conductors. Diane Loomer died in Vancouver, Canada after a short illness. She was 72. Here Chorus America board members Susan Knight and Leonard Ratzlaff remember their colleague and friend.


A native of Minnesota, USA, Diane moved to Vancouver in 1962. She was known for her many contributions in the choral sphere, but perhaps most prominently for her co-founding, with Morna Edmundson, of the women’s choir Elektra (1987) and the founding of the men’s choir Chor Leoni (1992). The latter was inspired by Sweden’s renowned male choir, Orphei Drängar, founded by Eric Ericson. Both Elektra and Chor Leoni performed and toured nationally and internationally, as well as regularly recording and broadcasting. Both choirs were in receipt of many accolades for their choral excellence. In 2007, Diane created her last ensemble, EnChor, intended for experienced singers “who had reached their 55th birthday”.

In addition to her choirs, Diane led an active career as a guest conductor and clinician. In 1994, she was the first female musician to conduct Canada’s National Youth Choir. She was a leader and encourager of choral colleagues and singers alike. Mentorship of young choral musicians was important to Diane, and she established programs to nurture their development. Diane gave great energy to promoting Canadian choral composers, and left a prolific commissioning legacy. This work was further enabled through the dissemination of these works through her dynamic touring, broadcasting and recording practice, as well as establishing, with her husband Dick, Cypress Choral Music, a publisher of Canadian choral music. A great supporter of arts organizations, most recently, Diane served as Vice-President for Advocacy from 2008-2012 on the board of the Association of Canadian Choral Communities. In 1993, she was a key organizer of IFCM’s 3rd World Symposium on Choral Music. She was also a sustaining member of Chorus America, providing the organization with additional support beyond her membership dues.

As a conductor, Diane’s instinct and philosophy was informed by her core belief in the person and in community, and the power of choral music to inform and enrich life. An impeccable musician, her work was also infused with empathic connection to her singers, the music and her audiences. In a recent national radio interview, in speaking about the sound of her men’s choir Chor Leoni, she witnessed this belief: “It’s sensual, it’s human, it can be brilliantly heroic and achingly tender... [it] can envelop and cradle listeners in a visceral way.”

Diane Loomer was a member of the Order of Canada, the nation’s highest civilian honour. She was awarded an honorary doctorate from the University of British Columbia in 2011. However, for all those who had the privilege to know her, she will principally be remembered for her delight in life and the caring warmth and inspired gift which she so generously shared throughout her stellar career.

Condolences may be posted on www.chorleoni.org.

Another loss to the choral world--Diane Loomer

Diane was, quite simply, a marvelous musician and human being. I can't say I knew her extraordinarily well, but had enough opportunities to be around her, talk with her, and hear examples of her work, dating back to 1990, to know what a special person and artist she was. Here a short obit from the Vancouver Sun--there will be more in the next few days from many sources, I know. A sad day for all of us in the choral world. 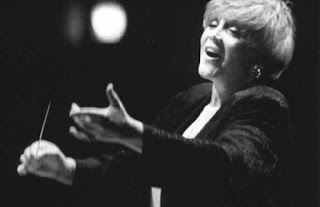 A notice on the choir's web site says Loomer, who died Monday, left a legacy that is "alive in the many works of Canadian composers and arrangers she championed, the artists and conductors she mentored, the singers she led in workshops, rehearsals, and performances around the world, and in the hearts of every past and present member of Chor Leoni."

The notice added: "Our thoughts are with her husband Dick and her family at this sad time and we request that you respect the privacy of the family."

Born in Minnesota in 1940, Loomer was also co-founder and conductor emerita of Elektra Women's Choir, a member of the Order of Canada and a YWCA Vancouver Woman of Distinction in Arts and Culture.

Vancouver Symphony Orchestra conductor Bramwell Tovey once said of Loomer: " Under Diane Loomer's direction, Chor Leoni has a polish, a sound, a spontaneity and a style that I feel is unequalled by any male voice choir that I have ever heard - and that includes the best on offer at the Eistedfodd in Wales."

We're very lucky at UNT to have support for live streaming of concerts and to be able to convert that video to YouTube clips. Huge thanks to Blair Liikala for all his work on this!

Posted by Richard at 7:16 AM No comments:

Norman Lebrecht writes about the younger generation of conductors who increasingly are getting major posts here.

It's an interesting trend. I've written about a few as well: 3 posts on Gustavo Dudamel when in Sweden, several posts on Yannick Nezet-Seguin, some on Daniel Harding, and several on the young Dutch choral conductor Peter Dijkstra.
Posted by Richard at 8:21 AM No comments: